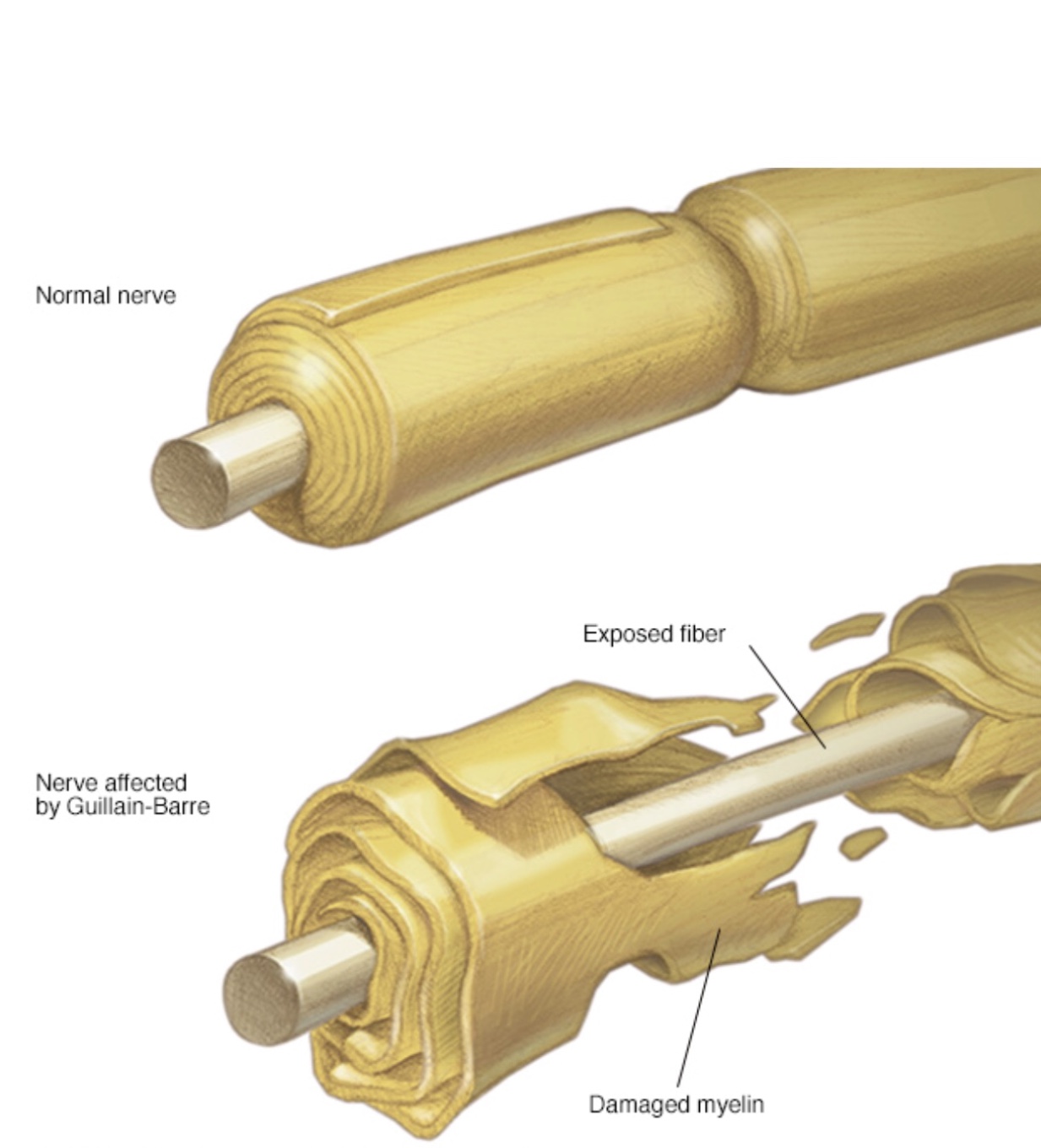 Guillain-Barre syndrome (GBS) causes progressive muscle weakness and paralysis , due to loss of myelin ( insulaing substance which is wrapped around nerves in the body, serving to speed conduction  of nerve impulses).without myelin , nerve conduction slows or stops.

The reason for destruction of myelin in GBS is unknowing, although it is thought that underlying problem is autoimmune  in nature.And myelin sheath becoming  target for the body’s own immune system.The fact that  so many cases of GBS began after a viral or bacterial infection suggests that certain characteristics of some viruses and bacteria may activate the immune system inappropriately.

The first symptoms of GBS consist of muscle weakness( legs first, then arms, then face), accompanied by prickly, tingling sensations .normal reflexes are first diminished, then lost. the weakness eventually affects all voluntary muscles. When those  muscles necessary for breathing become paralyzed, the patient must be placed on a mechanical ventilator.

Some of them suffers from residual weakness , others from permanent paralysis.

Patient C. was brought to me with help of her brother , because of severe muscle  weakness and loss of balance. I was told that she is sick only  1-2 month back, that’s why I accepted her,

but in reality it was already 6 month duration of suffering.

Physical complains; severe pain in calves, weakness of both legs, which progressed later to the arms, tingling and sensation of electricity in her hands shouting to arms  (she said like gloves), loss of balance while walking, instability while standing, .

In homeopathy we are very concerned about the causative factor  of the suffering.

And i dug  out.She was preparing wedding party for her sister . And as a perfectionist and strong personality  , she did all possible and impossible to make it great. A lot of physical work was done,mental logistic, emotional worries and anxiety about final result. And party was a great success! But soon she become to know some gossips about wedding, family and so on which freaked her out completely.I consider that emotionally her anger for no appreciation triggered her immune system down and In month after wedding  she developed Guillain-Barre syndrome, which was progressing despite the best expensive modern treatment. All was in use – plasmapheresis, immunoglobulin intravenous infusions, steroids, and later on antidepressant . 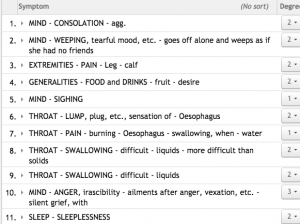 Ignatia Amara 200 ch was given in diluted dose . with gradually  increasing  dynamization.

She is in much better ; mood, more positive, more cheerful. Husband and children cannot believe that she is so improved emotionally , now she is like used to be  before sickness. Sleep improved as well.

BUT absolutely no improvement for physical complaints. The muscular weakness,  tingling, pain, unsteadiness  were the same.

Recommended continuation of Ignatia Amara 200 CH with gradually  increasing  dynamization for 1 and half month.

Second follow up  after 2  month  distant , on whatsapp. She said that pain in calves better now,  tingling and electrical waves in her hands better,  her  walking more controlled,unsteadiness while standing and walking also better ,but still not like usually. Her mood and sleep are good.

Ignatia Amara 1M in diluted dose . One dose of Ignatia diluted in 250ml of water and taking by  patient 1 teaspoon  30 min before breakfast for 1 month.

Mentally  and emotionally she is doing very great.

And physically as well . She has no pain in calves, no tingling and electricity shouts in her hands, she can walk with great confidence, even started driving again children to school.