Ovarian cysts are fluid-filled sacs in an ovary or on it surface.

Many women have ovarian cysts at some time. Majority of ovarian cysts causing mild complains and can disappear within one or few months

But some of them, especially those that have ruptured can cause  serious problems.

2.Fullness or heaviness in abdomen

Functional cysts  – follicular cyst developing when in the middle of cycle  follicle did not  rupture or release its egg ,but instead continues to grow.

Corpus luteum cyst may develop , if fluid accumulates inside  the follicle after egg has been  released.

Dermoid cysts, or teratomas can contain  tissue like hair, teeth or  fat , because they originated from embryonic cells.

Cystadenomas can reach big size . They might be filled with watery or mucousy contains .

Endometriomas are  cysts with develop when uterine endometrial cells grow outside of uterus. They became more often nowadays. They are treated usually by hormonal medicines, and in case of  it failure operative removal of cyst  are recommended.

1.  Ovarian torsion  or twisting of ovary which can cause stopping blood flow to the ovary , with emergency operation -removal all  ovary.

2. Rupture . The larger cyst  has more risk of rupture.

3.Adhesions-especially in case of endometriomas

A. S. 33 years old  came to me on November 29 2017 with  history of  left  endometrial   cyst. She was on Danazon treatment for 6 month, without significant effect and was offered an operation- laparoscopic  cystectomy.

Her complaints include  a lot of mental and emotional disturbances  and left low abdomen pain. She was sad, depressed, has fear of death, water. She is very fastidious at home,preoccupied with extra cleanliness. And one interesting symptom: when she is crying constant  cough will bother her, which usually  not appear without cry. She consulted a lot of doctors, concerning this cough, but no solution, no  cause  or reason  were find.She  is thirsty,  chilly, on and off  d having stomach pain with burning sensation. 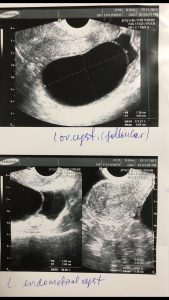 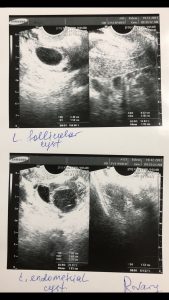 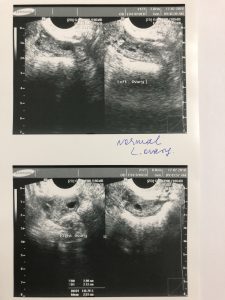 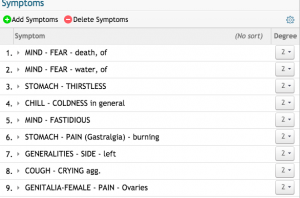 Arsenicum Album 200 ch was chosen and prescribed in diluted form for 1 month.

First follow up  on telephone on December 6 2017, 1 weeks after  beginning of treatment.

Patient complained for mild  body rash and bloating.Recommended to stop remedy intake for 5 days and  then call Doctor.

5 days after. Rash faded away, bloating much less.( Rash is a externalization of internal problems – good , promising sign during homeopathic treatment).

Patient came earlier for appointment, because of anxiety about her health  and to know  size of the cysts .

She said that her mood improved a lot, she love shopping.

Her fear of death became lesser. And cough during  cry, rarely  bothering her. Still has fear of water mass as ocean or sea,but this is not bothering her .

Abdominal pain are much less now.

Her scan showed  decreasing size of follicular cyst from 7-8 cm to 2.4-1.5cm.Her endometrioid cyst diminished from 3cm to 1.8-1.6cm diameter.

No complains of abdominal pain.

Mental and emotional she is much  better. Relation with husband are back to normal.

On ultrasound, both ovaries are absolutely normal;  to the relief and happiness not only of the patient and her husband, but of the doctor as well..

Once a woman has an ovarian cyst, she is more likely to develop  it again in the same ovary or in the other one in the future.

Ovarian cysts can be removed surgically and it sometimes even may be the only choice. However, it generates several complications:

There is no prevention for ovarian cyst, despite the use of contraceptive pills with uncertain and unpredictable results.

Only homeopathy can treat ovarian cysts and stop the tendency of the recurrence of cysts in the future. In homeopathy, it’s not always the same remedy for the same disease. So, any another woman with the absolute same cysts may need another treatment. Such individualisation of each patient requires time and the expertise of the homeopathic practitioner, but the results are worth fortunes.