Low-grade neoplasia (CIN 1 or LSIL) refers to dysplasia that involves about one-third of the thickness of the epithelium.

CIN 2 (HSIL) refers to abnormal changes in bout one-third to two-thirds of the epithelial layer.

CIN3 (HSIL) – severe dysplasia describes a condition, that affects more than two-thirds of the cervical epithelium.

Cervical intraepithelial neoplasia (CIN) is typically a progression of infection with the Human PapillomaVirus (HPV). The virus is spread through sexual skin-to-skin contact, which means condoms are not always effective. Most countries do not include HPV testing as part of an STI test panel, and many individuals remain asymptomatic, which allows the virus to spread very quickly. In Canada, 75% of sexually active adults will have had an HPV infection at least once in their lifetime.

There are over 100 strains of HPV, some of which (HPV 16 and HPV 18) are much more likely to infect the reproductive tract in women and cause CIN.

In most cases, HPV infections will clear out on their own, however, this often depends on having a healthy immune system. In some cases, the infection lingers, and can eventually progress to cervical cancer. Other risk factors include:

Since CIN usually does not cause any symptoms, a Pap smear is needed to find abnormal cells. If the Pap test is unclear or abnormalities are found, the next step might be a colposcopy to examine the cervix and surrounding structures under a microscope.

Side effects of LEEP include: 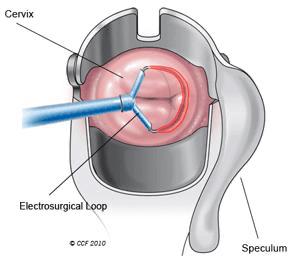 2. Cold knife cone biopsy (conization) – This is a surgical procedure in which a cone-shaped piece of tissue containing the lesion is removed.

3. Hysterectomy – removal of the uterus 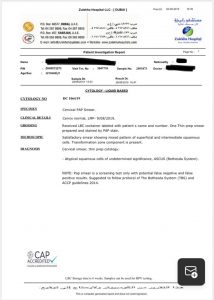 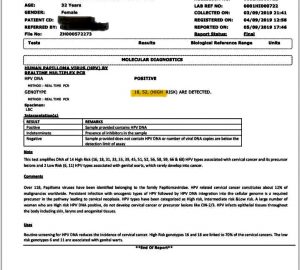 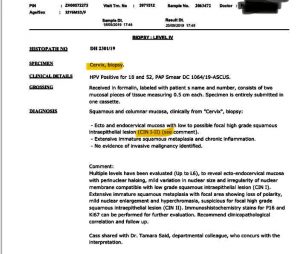 The patient was advised to undergo LEEP procedure. She preferred to make some healthy modifications to her life and then to be rechecked. From September 2019 till May 2020, she was doing regular exercises, ice baths, magnotherapy, stopped eating sweets.

In May 2020 her PAP smear result showed CIN 1 (LSIL) which is worse than before (ASCUS). At this point, her Gynaecologist strongly advised her for doing the LEEP procedure. The patient does not have children yet, and she was scared of conization. She decided to come to me for homeopathic treatment. 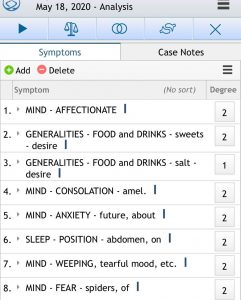 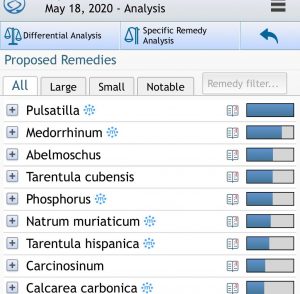 Pulsatilla 200 CH was prescribed in diluted form for 1 month.

The patient still has anxiety, sleep disturbance, palpitations, and internal trembling. She has a dry rash on her fingers eczema (old symptom) and body rash. The acne has gotten worse, nodular. The patient asked if she is ok to seek laser removal for her acne. I advised against this, as this would be suppression of skin manifestation. 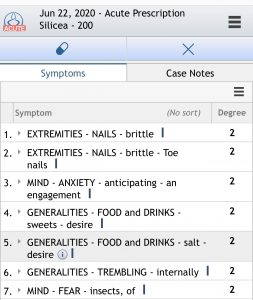 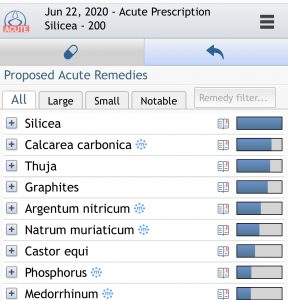 Silica 200 CH was given in diluted form with increased dynamization for 1 month.

The patient got a skin rash-folliculitis on her abdomen. I advised against using any creams and the rash disappeared after 3 days on its own. Her acne got better as well, less nodular but pigmented. Nails better. Hair falls less. Body rash is gone. Her doctor also said her PCOD has gotten much better, especially on She did a scan in her hospital and Dr said her PCOD much better, especially in her right side.

Gynae examination revealed that her cervical erosion had become smaller.

Repertorization of her symptoms: 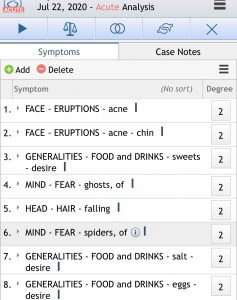 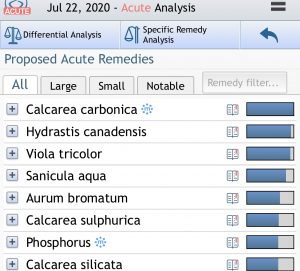 Calcarea Carb 200 CH was given in diluted form for 1 month.

Patient-reported that her sleep and mood has gotten better. She had boils on her back with pus coming out of them.

Gynae examination revealed no cervical erosion anymore. Her Cervix looked healthy. She was no longer anxious about her health, her hair fall stopped, acne got much better, and periods became more regular. She still had some eczema on her hands. 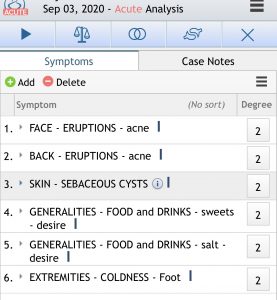 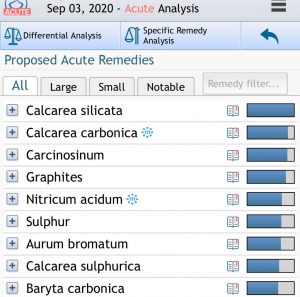 Calcarea Carbonica 200CH was given again in diluted form, but with stronger dynamization for 1 month.

In October 2020 she checked her PAP smear. It was normal. Eczema was gone. Acne is much better.

HPV was checked in November 2020, the result is negative. 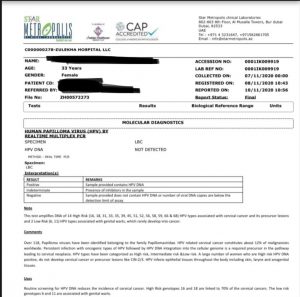 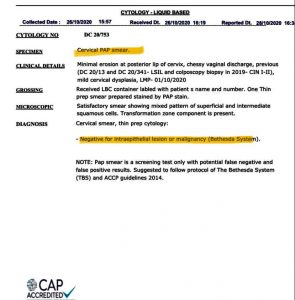 After 4 months of homeopathic treatment, her cervical erosion disappeared, the cervix is normal in appearance. Her LB PAP smear is normal. Her HPV test is negative. She doesn’t have any anxiety. Her self-confidence has improved. Her hair falls stopped. Her PCOD improved, periods more regular now. Her acne improved a lot.

This case showed a very successful cure of deep precancerous cervical changes CIN1-CIN2(LSIL-HSIL), associated with high oncological risk HPV 18, with the use of homeopathic treatment in 4 months.