Case of teenage girl with Trichotillomania 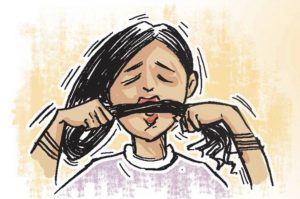 Trichotillomania is a type of impulse control disorder. People with these disorders know that they can do damage by acting on the impulses, but they cannot stop themselves. They may pull out their hair when they’re stressed as a way to soothe themselves.  It s regarded by some as a’body repetitive behavior’. Trichotillomania can occur in conjunction with a variety of conditions such as depression, anxiety disorders, obsessive compulsive disorder (OCD) , or attention deficit hyperactivity (ADHD).

The following is an article from The Hindustan Times: 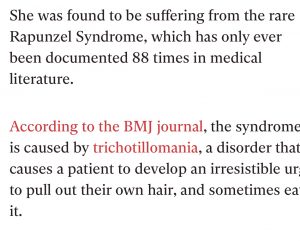 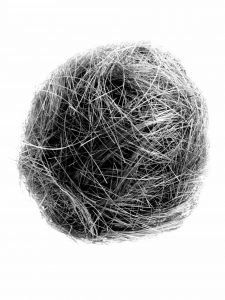 On March 2019 i had a similar case of a 12 year-old girl, who was brought by her mom who was complaining that her daughter was occasionally pulling her hair, wrapping it around her fist and eating it. She had been doing this for 4 years.

Additionally, the girl was overweight, had problems with concentration in her studies and did not like to socialize. When her family would have a party, she hid in a room and cried as her mother was trying to persuade her to go out & meet the guests. In school, she barely sits on her place and instead wanders around the class during the lesson(ADHD).

She is obese and experiences abdominal pain time to time, so her mother was afraid that her daughter might have a hairball in her intestines.

She often experienced follicular tonsillitis with high fever. Her tonsils are huge even when it is not an acute infection.

I took her case & gave her homeopathic remedy for 1 month.

3 weeks later her mom reported to me improvement by 80%.

She barely pulled and ate her hair, became more sociable( started sitting with guests, not love it but accepted, not hiding in her room), her behavior in school matured , she more focused and her marks became better.

After 6 months all complaints became less &  her tonsillitis did not bothering her yet since treatment.

It is a success story with rare disorder.

What could happen if she didn’t get proper homeopathic treatment: